INFPs are feelers so they feel everything so deeply. Their over thinking and over analytical nature can lead them to assume things and misread people, especially in the early stages of the relationship which can sabotage it before it even starts because they tend to take things personally. Love fuels their creativity and invigorates their lives. They care deeply about causes, people and even strangers. They worry about their friends and family.

They need to fall back in order to come back stronger. This makes it harder for them to meet people out or give someone a fair chance to approach them. But now I see it wasn't always percieved as expressing my feelings. My feelings come through the things I do. This is how the last relationship broke down. She asked to see my feelings, and just couldn't see them. But they were there for all to see. My heart was on my sleeve, and in my actions, and my words were misunderstood.

She just saw a sturdy rock, calm under adversity. In control of all emotion, at all times. The damage was done, she'd already pushed me away over time. Hurting me little by little, and because of my avoidance of confrontaion, you can guess the rest. She felt like she was just another of my causes, under my wing. She felt that it wouldn't matter who she was, I loved all equally. Which I guess is true to a degree. But she was the one I chose to be with, but that must not have mattered enough.

She thought I loved her like a sister, more than a lover. When she explained that at the end, I suggested that wouldn't be such a bad thing, as I love my sisters more than life itself. I don't live with my sisters I live with you and your 5 children. We are close but we don't live in each others pockets. Anyway, you don't need to know all this. Thanks for your story. I don't think that's correct. Empathy is the ability to 'feel' what others are feeling, to 'put yourself in their shoes', so to speak. Sympathy is simply feeling pity or sorrow for someone's situation.

It's more distant but not visceral, as empathy may be. I would imagine counsellors would need to be empathetic for sure, at least it would certainly help.

But there would need to be ways to protect themselves from going too far into empathy and remaining objective. This is an interesting observation.. When I took a look at where I fell along the scale for thinking and feeling my score was almost dead center, with just a small fraction leaning in the 'feeling' side of things. I was told by a psychologist that the labels themselves do not reveal as much as where you fall along each scale of the spectrum and that you also have to consider how different situations can exercise or bring out different aspects of our personality.

Actually, one common mistake with MBTI is that they define feeling-types as those who prefer emotions over logic. However, the term feeling means that we prioritize our values over logic. Thank you so much, I've been wondering about this too! INFP's and F's for that matter "prioritize" emotions, human relationships, and morals.

This is not "illogical" but highly logical due to the need for positive human relationships in this life and maybe the next. INTP's and T's for that matter "prioritize" logic, cause and effect, and principles. This is a great observation. I live in a deeply emotional and relational world, and I seek out facts and data and apply logic to them with a high degree of rigor and consistency because I find it is extremely helpful in revealing what the emotions I'm feeling or perceiving from others actually are. I'm constantly seeking for better ways to more accurately 'see clearly', if that makes sense, as seeing the accurate context surrounding emotions or reactions helps me tease out the nuances, and that's exciting to me.

If I don't seek out facts and just really on my perceptions, then I am prone to building an entire understanding of things based on my assumptions, and that can lead to decisions and behaviors that aren't in alignment with who I want to be.

I'd say it's a learned skill, but not especially difficult. The first time it really pays off because you asked someone to clarify something you thought you knew, and it turns out you were wrong and the follow up conversation helps you get better insight - well, you'll be hooked.

I agree and disagree. The thing to remember is that the types are all on a spectrum. I personally test close to the midpoint between N and T which makes people perceive me as being very logical at times. And I do like facts, but I struggle when my logic and intuition are at odds. Personality is never clear cut and is ever evolving. The descriptions would help my coworkers understand me better. Yes I agree with you Lisa it's been very hard to someone express my feeling.

I'm thinking about universe and society the creater I'm always been alone thinking and doing meditation Also, remember that there is a spectrum for each set of traits. For example, I utilize both my F and T function equally depending on the environment I will use one or the other more dominantly. 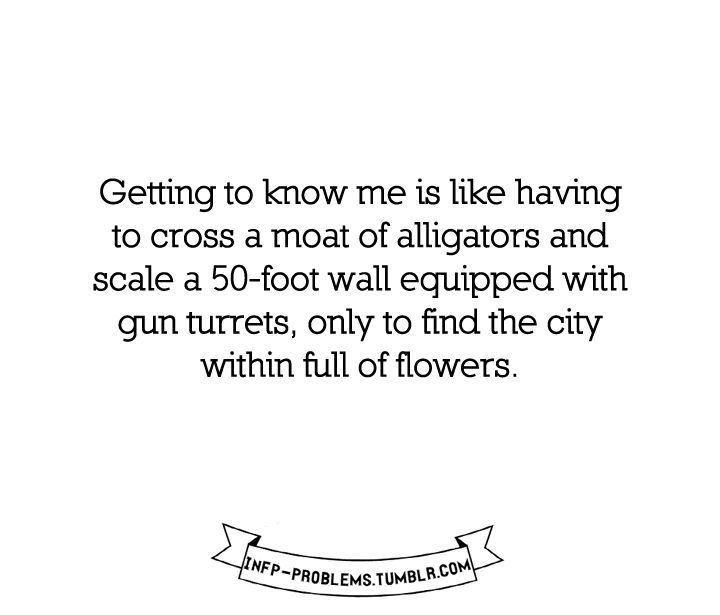 It's not that we're illogical idealists, I think it's more like we rely on our gut feelings to head us in the right direction. We are idealistic but we also hurt deeply because few ever meet our ideals, especially society as a whole. I keep saying we when I should say me or I.

Just because someone feels something deeply or follows their gut doesn't mean we lack the ability to think logically or that we don't use logic. Hope that helps a few understand a little better. Hello, I've learned myself to be of infp brand. I enjoy the clarity with which you wrote. About how we tend to perceptualize, how everything has system, and about how it's all about relationship with these systems. This past year I experienced the awareness of that, exactly.

This experience we find ourselves in. As body-mind-soul journey-ers , in this universe.

INFP on What DESTROYS relationships!

And so I found resonance with the bit you wrote. I felt crazy at times prior to learning about different personality types, because I was acutely aware that many in my environment didnt seem to have the same functionings going on. But as my exploration of self discovery has continued, I've now learned to embrace those innate curiosities and intuitive drive that makes me tic. And to see how I function in the world, with the gifts that it can bring- for the greater good of humanity and Gaya and all.

1. They want an all-in-one kind of love.

And so as I've been striving to understand our human experience, and different ways to navigate our time here on this planet, I've found understanding on a deeper level than I had before, of the role of relationship in this human experience with one another. And that of course, includes relationship of humans, amidst all the co-existing systems that exist in the physical world, in society, in the environment, in the energy realms invisible to the naked eye.

I think that I do this because as an INFP I value being well-rounded, and as that is a part of my ideals then I decided to learn to be both.